Graši 5 personām (Rissoles for 5 people) is recipe #111 in the book. Although I have never heard of the word graši in food context (it would usually translate as pennies, small amounts of money), it attracted me as something familiar, think a more complex cousin of kotlete.

The recipe is quite simple:

“Fry 3-4 finely chopped onions with 2 tablespoons of butter and 3-4 tablespoons of porcini (cep) mushrooms, needed salt and pepper; saute for 15-20 minutes, add 3-4 tablespoons breadcrumbs, mix well. Then take 2 tablespoons of sour cream, 2 eggs, whip them together and add to mushrooms, mix well and remove from the heat to cool down.
Mince 2 pounds of beef with a bit of speck, add salt, pepper, breadcrumbs, 1 onion, 2 tablespoons sour cream and mix together until it has come together. Roll a thin layer of meat, cut a circle with a glass and place a teaspoon of mushroom mixture on it. Bring the edges together, and create round or egg-shaped balls. Place the balls in brown butter, brown them together with couple pieces of speck. Place the balls in a saucepan, cover with stock, add onion, 1 parsley, cover and saute on low heat for 2 hours. Place the meatballs in a bowl, add more stock to the sauce, some sour cream, a bit of flour; taste and pour over meatballs through a sieve. Serve with potatoes.”

All I can say, I hope you like onion…

To keep as close to tradition, I minced beef and bits of smoked speck in a food processor, rather than  buying minced (ground) meat. It allowed for much rougher cut which worked out well when I had to form the balls. Other ingredients – sour cream, breadcrumbs,  etc. – in the meat mixture remained the same, however, I added finely grated onion, rather than just chopped.

I made some adjustments to the filling – instead of 4 onions, I used only two, as I gathered onions in 1920s would have been much smaller than humongous vegetables we buy these days. I doubled the amount of mushrooms, because the ratio just seemed too heavy on the onion. I followed the cooking method, but I believe it would have been better, if I cooked onion for 5 minutes and then add mushrooms for the next 15. Cream and egg mixture worked well, but make sure the pan is removed from the heat quickly so it does not start to form an omelette. As a result the stuffing tasted like a very thick mushroom sauce (picture left below). 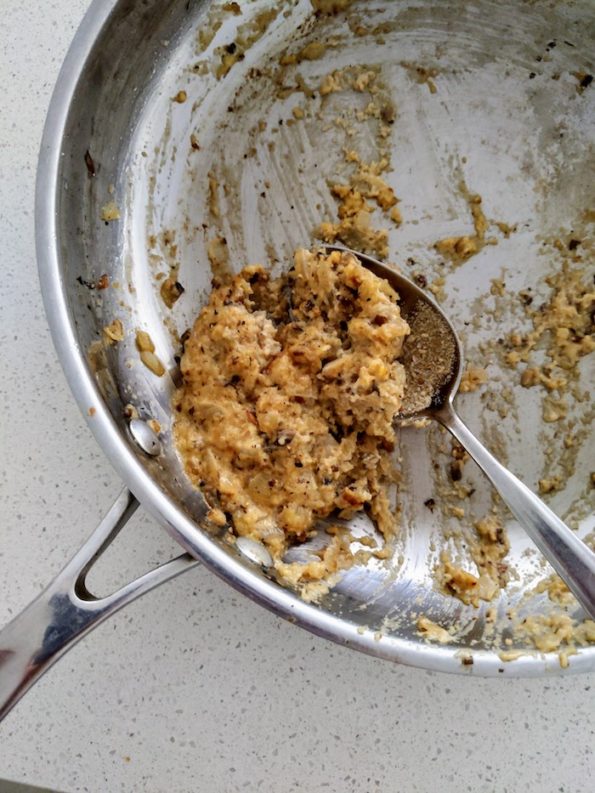 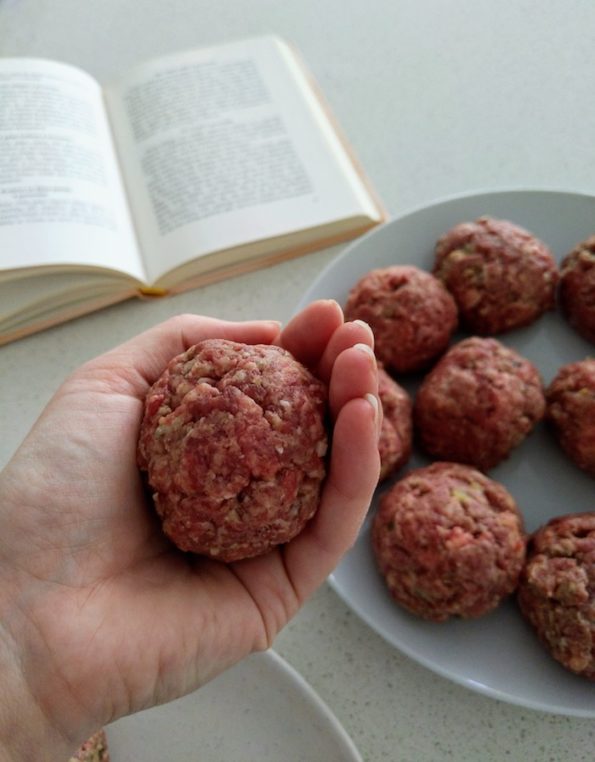 While the filling was cooking, I prepared and rolled out the meat mixture. Even though the recipe suggests a “thin layer”, it works best if it is at least 1cm thick, otherwise you are risking the filling to fall out. The rest is like making pīrāgi – cut out a circle, place filling in the middle, squeeze meat shut and form a ball.

To fry the rissoles, I used a wide cast iron pan. I left the meatballs in the pan after frying and just added vegetable stock, bayleaf and half an onion to it, covered and cooked on low heat for 30 minutes. I then removed the meatballs, and went against the recipe by straining the sauce first and then returning it to the pan to add flour, cream and seasoning, rather than straining afterwards as it would have been too thick. I returned the rissoles to the gravy to heat them through.

Serving was easy – boiled potatoes and recipe #197 Cucumbers with vinegar: slice peeled cucumbers, sprinkle with salt and pepper, pour vinegar over them and sprinkle with dill. To keep with the theme, I added onion too.

This dish tastes familiar, and reminds me of lunches we used to have in the middle of summer at my great uncles place in Auce. It is definitely worth making – meat is juicy, filling creamy and gravy alone is phenomenal, while vinegary cucumbers add necessary balance. Just make sure you invite your  family or friends over – this recipe yielded 14 tennis ball sized rissoles – more than enough for 5 people. 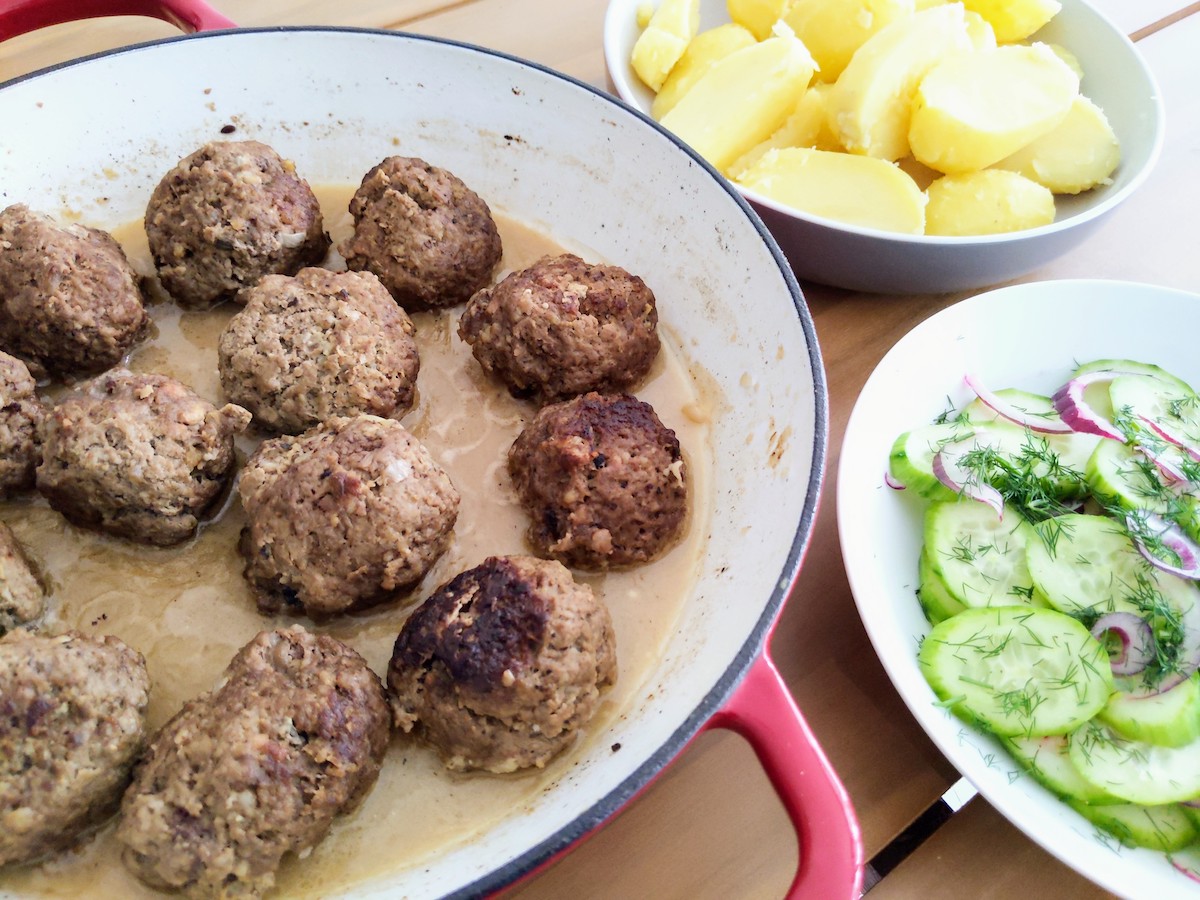 For the rissoles
For the filling
For the gravy

For the rissoles
For the filling