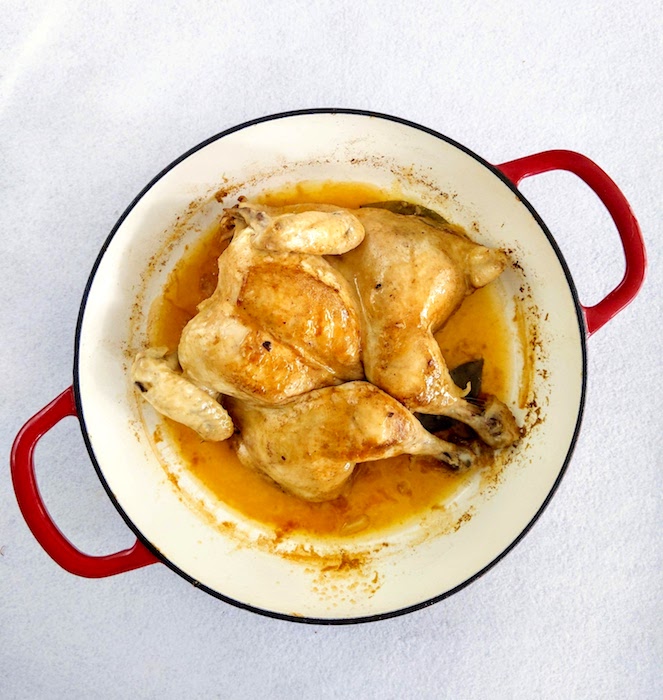 How many chickens does it take to feed 6 people?

I would have thought 2 would be enough. Yet, to my initial amusement, the 1920s cookbook I’m using is suggesting that 4 chickens will be required. This rather short ingredient list (I’ll get to it in a minute), prompted some research of how big chickens actually used to be, and how much they have grown.

Research done in the USA and Canada suggests that meat chickens, also known as broiler chickens, used to weigh just over 1kg (2.5 lbs) in 1920s. Fast forward 100 years, and now the market weight of a chicken is around 2.7kg (around 6 lbs). It does not necessarily mean you will find a 6 pound broiler in your supermarket just yet (even though I’ve recently seen 1 pound heavy chicken breasts for sale) but you get the idea how selective breeding and improved nutrition has more than doubled the size of the bird.

As for Latvia, statistics reveal that chickens in 1920s and 1930s were kept almost exclusively for production of eggs, and larger proportion of poultry was made up from turkeys, ducks and geese. In modern Latvia, broilers make up a third of the chicken population in the country.

But back to the recipe #146 Cāļu cepetis 6 personām (Roast chicken for 6): “Take 4 larger chickens, clean them nicely, rub them with salt, place in brown butter and fry until brown. Add water and, while basting frequently, roast until soft. While roasting, it may be prudent to baste with cream, then chickens get very tasty. At the end, chicken liver can be chopped finely and added to the sauce for a pleasant flavour. Serve with sauteed peas or beans. Salad could be cooked plums, pears or lingonberry preserves”.

To be quite frank, this is the least descriptive recipe I have ever read. I have roasted a fair bit of chickens in my life, so I took some liberties on how to interpret this particular recipe.

I started by taking a 1.5kg (3.4 lbs) free range bird – you may not believe me, but free range does taste much better than your regular chicken. Instead of leaving it whole, I butterflied the bird to make cooking process a bit faster – I kept the backbone attached as many love to eat the little tail. I ditched the roasting pan and oven and used my cast iron French pan and stove instead – it made basting so much easier.

Hour and a half later I tasted the best chicken ever. It was fall-off-the-bone tender, juicy but well cooked at the same time, and had some intangible flavour quality I have never been quite able to capture before. The pan sauce was meaty despite the cream added and so delicious that I kept coming back for it alone. My only complaint would be about the lack of crispy chicken skin, but I am willing to let that one go. As book suggested, I served it with sauteed peas and for the first time I felt that potatoes were not a necessary side dish to a chicken. So even though the original recipe was very vague, it did produce a fantastic meal.

If you are cooking for 6, you will need 2 birds, and you may need to keep them whole to place them both in a pan or pot you are using.

I never wash my chicken - it is not customary in Latvia and it causes health risks. If you wash the chicken, make sure it is dry before it is rubbed with salt and coked in butter.