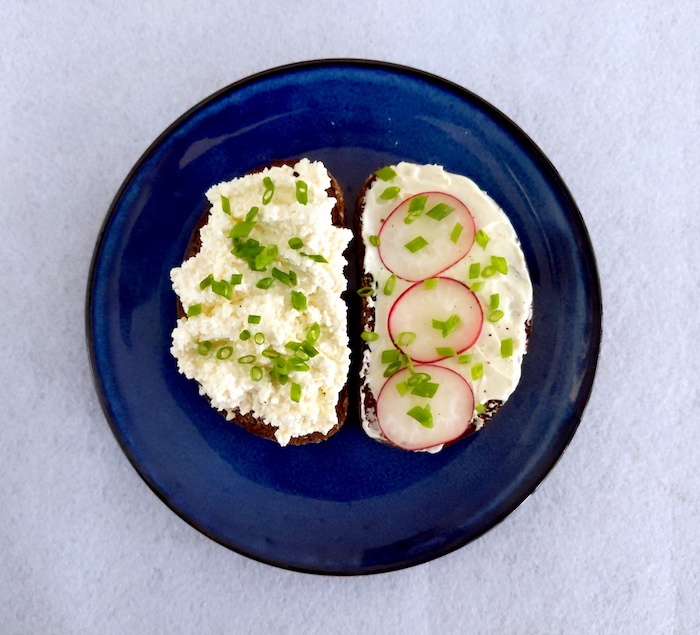 Open sandwiches. Food that is mostly associated with Danish cuisine, yet is so common in Latvia. So common, that it seems hilarious to find breakfast sandwich recipes in a cookbook. But here they are – Chapter 1 Brokastu ēdieni un sviestmaizītes (Breakfast dishes and sandwiches). I will work my way through them, based on the bread used, be it white bread (baltmaize), rye bread (rupjmaize) or sweat and sour rye bread (saldskābmaize).

Recipe #3 is Pavasara maizītes (Spring sandwiches). As the book does not elaborate why these sandwiches are associated with spring, I can only speculate that abundance of milk in the spring, after the calving season, would lead to making cottage cheese (biezpiens), which then would be used to make breakfast sandwiches. Also, chives were the first herbs appearing after a long winter. The recipe is very simple: “thinly slice white bread, spread with butter, then mix cottage cheese with sour cream, cover the bread with a heap of this mixture and garnish with butter roses and chives.” As for the quantities, you will need 2 tablespoons of dry, crumbly cottage cheese and 2 tablespoons of sour cream for each slice of bread. As much as I love butter, I skipped “butter roses”, but added generous amount of chives. To make this dish a bit more exciting, add parsley, dill and chives to the cottage cheese mixture, and make sure it is seasoned well.

Recipe #4 is Redīsu maizītes (Radish sandwiches). This is even simpler approach to breakfast: “spread sour cream on sliced rye bread; slice radishes and place them on the bread in rose pattern, and garnish with chives“. If you are not a fan of radishes, use cucumber or tomato instead. 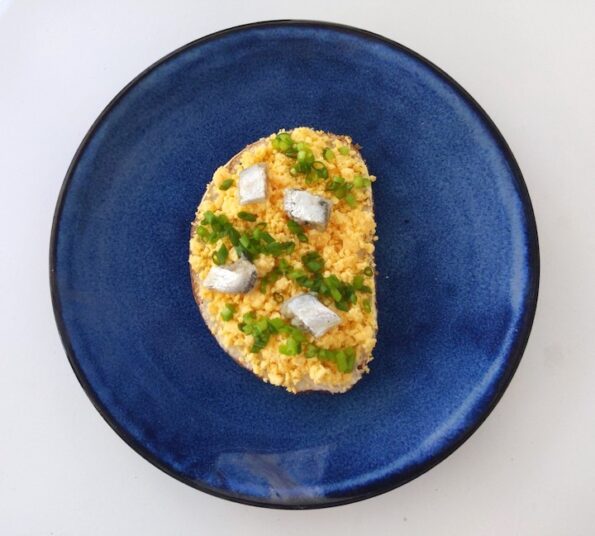 Recipe #9 – sardine sandwiches – is another dish you are very likely to find on “aukstais galds” aka Latvian buffet table at any major celebration. It also settles the discussion about what has to go on the bread first – fish or egg. Here’s the recipe: “Slice sweet and sour bread, spread the butter, cover with egg yolks and chives in stripes; finally place a piece of descaled and deboned sardine“.  Interestingly, this recipe does not use entire slice of hard-boiled egg, which is so common these days, yolk is used instead. It is also not clear how the sardines were prepared; were they cured or smoked? I’ve stuck with a more common version of using cured sardines (ķilavas) instead of smoked sardines (šprotes). If you don’t have sweet and sour (saldskābmaize) available, you can use white bread instead.