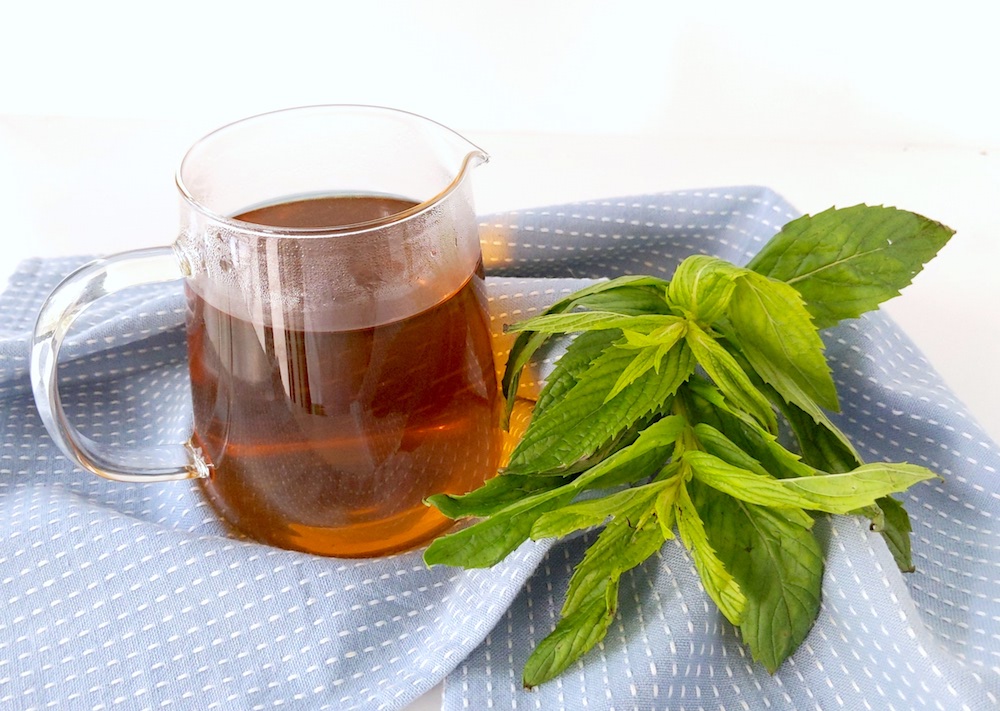 Sanita Stinkule, the Head of Ethnography Department of the National History Museum of Latvia, offers a quick glimpse into the history of Latvian food. This series of articles was originally published on delfi.lv, and they have been translated and republished with permission from the author.

Just like many other everyday dishes, drinks were also made from cereals and dairy; most drinks were fermented because sourness balanced coarse and salty food.

The most significant drink served with bread, porridge, potatoes and other substantial meals was milk or curdled milk. As the milk supply was limited and no milk was available in the winter, drinks were created from cereals. These drinks were rye flour drink (skābums), barley porridge (skābputra), kvass made from rye bread rusks and patekas made from the malt that was left over after making beer.

Skābums was popular in Vidzeme; it was fermented from a whipped mixture of coarse rye flour and hot water and served with added water, milk or curdled milk. Skābputra was common in Kurzeme. It was made by cooking flour or groats in milk or curdled milk and then letting porridge ferment. In Latgale oat flour was fermented for drinks. Patekas, also known as third beer, were popular in the entire country. This drink was made from pouring water over malt that was used making beer. Kvass or dzersis was created by pouring boiling hot water over rye bread rusks and letting the drink to ferment for a couple of days. Kvass was not widely available as bread was limited and usually none was left over.

Tea – for health, coffee – for fashion

In the olden days, tea was brewed to heal. Every household had bunches of various herbs hanging in their attic or granary. Latvians recognised more than 300 various plants for their healing benefits. At the end of the 19th century when sugar became more available to the farmers, herbal teas were served as an aromatic refreshing drink, especially on cold winter evenings. Around the same time, imported tea was introduced, however, up until the Great War, it was drunk very rarely. More common was homemade linden tea, dried apple leaf tea, chamomile tea, lingonberry tea, blackcurrant tea and peppermint tea.

At the beginning of the 20th century, farmers started to drink coffee. It was a fashion trend, which was called kungu našķis (literally, “gentlemen’s treat”). Coffee beans were too expensive for the farmers, so they got creative making coffee from chicory roots, acorns and grains. This coffee was usually served on Sunday mornings. How was it made? First, peel acorns, cut them in halves, lightly roast and crush in the pestle. Then take chicory roots, cut them into smaller pieces, roast and crush in a pestle. Roast barley grain and crush them in a pestle. Mix them all together and store them in a canister. When you want to make coffee, pour the mixture into boiling water, simmer and add milk.

Misa and zlaukts – what are those?

During celebrations, farmers served home-brewed barley beer. If the first major ingredient was barley, the second was hops; hops flavoured the beer and acted as a natural preservative.

Brewing beer required a significant amount of time – it would take 3 to 4 weeks to make. First, barley malt had to be created. Grains were soaked for 2 to 3 days, then germinated for 3 to 10 days until they had shot a few centimetres long. Then they were dried for 3 days and coarsely ground. During this process starch in the grains turned into maltose (malt sugar), which then ensured fermentation.

The brewing process usually started with mashing or creating misa or brāga (in Latgale). Misa was made in a large vessel by pouring hot water over malt flour and letting the mixture sit for 12 hours while maltose sweetened the water. The proportion of flour and water was determined by the experience of the brewer. Usually, there was twice as much beer as malt flour; and the more malt flour in the mixture, the stronger the beer.

Misa was poured from the vessel with help of another vessel – zlaukts. It had a drainage hole at the bottom and a straw filter above it. Straw prevented the malt from settling at the bottom and misa could trickle through. Misa was filtered very slowly, for 5 to 8 hours.

How beer was fermented and kegged

Misa became beer during fermentation. During fermentation, process sugar turned into alcohol and carbonic acid. A large vat was scrubbed clean, misa was poured in it and hops were added. Yeast was also added – it was collected from the sediment of the previous brew. Beer fermented in 2 to 3 days; it fermented faster in warm weather and slower in cold. The beer was softer and tasted better if it fermented for a longer time.

The last step of brewing beer was kegging it. Beer continued to ferment in kegs and that created pressure within them, therefore, kegs were made from hardwood – mostly oak, occasionally beech and ash. Before drinking, beer was left in kegs for 2 to 3 weeks. Good beer was a beer that foamed well.

What was considered a treat?

Our ancestors had a very different understanding of what was a treat, compared to us. A treat was something that was not eaten daily or was eaten on very rare occasions. During very special celebrations wheat bread soaked in milk and fried was served. Similarly, cheese, butter, meat and sausages were a treat. Honey and eggs were only served to very special guests. Even big landlords in manors served bread, cucumbers and honey to their guests up until the end of the 19th century.

Most common desserts were oat kissel (auzu ķīselis) and dishes from wild berries that did not require sugar for preserving them – lingonberries, cranberries and bilberries – wheat dumplings with bilberry sauce, lingonberry or cranberry jam with milk and boiled carrot and beetroot slices.

Significant changes to desserts occurred at the end of the 19th century when sugar became more available in the Latvian countryside. Sugar was introduced in Latvia in medieval times, but it was very expensive so very few could afford it in very small quantities.

Sugar became more widely accessible in the 18th century when sugar cane was introduced from America. The production of sugar escalated in the 19th century as it was made from sugarbeets. Even though sugar from beets was cheaper than sugar from cane, it was still too expensive for the farmers. Sugar became a significant ingredient only in the 1920s when the sugar production industry developed in Latvia.

Where and how our ancestors prepared the food

It was a custom to prepare certain foods on certain days of the week to ensure that various provisions are used up at a similar rate. Even in the 19th century Thursdays and Sundays were cabbage days – sauerkraut soup or stewed cabbage with meat made an appearance. Wednesdays and Saturdays were porridge days, barley and, more recently, potato porridge were common. Mondays, Tuesdays, and Fridays were pea and bean days.

Dishes were prepared on an open fire in Vidzeme and Kurzeme. The fire was lit in the mantle chimney (manteļskurstenis), and pots were hung in the chimney or rested on stones that were placed around the fire. As a result, most of the food was boiled – cereal and fat or milk porridge. The oven was heated only to bake bread. In Latgale, food was prepared in an oven – porridge, cabbage and other food were stewed in the oven in flat-based pots.

At the end of the 19th-century dwellings saw an introduction of chimneys and built-in stoves with cooking rings and ovens. Pans and saucepans with a handle became more common. Food preparation became faster and more convenient – one could place more than one pan or pot on the stovetop. It also introduced more diversity – food now could be fried or roasted/baked in the oven.

As preparing food on an open fire was time-consuming and not easy, it was made only once a day in larger quantities to last for a day. Usually, porridge was made for dinner, and leftovers were reheated in the morning or eaten cold with cottage cheese, herring or salted sprats. The introduction of stoves meant that the food was prepared more frequently.

Eating from one bowl and bleaching spoons in the sun

It was very common for the entire household to eat from the same bowl, and everyone would have their own spoon and pocketknife. All dishes and utensils – bowls, plates and spoons – were made from wood or clay.

After eating, spoons were scrubbed clean and placed outside in the sun to bleach them and prevent them from taking on various flavours from the food. Separate plates for each household member were introduced at the end of the 19th century. Forks and table knives became popular after the Great War, especially stainless steel cutlery that could be kept shiny. Pocketknives still were used when eating alone in the hay fields or forests.

Farmers became more educated and affluent at the end of the 19th century and the beginning of the 20th century, and some of the city habits and technological achievements were introduced in the smaller farms. Ancient ways of cooking were replaced by dishes from cookbooks translated in Latvian, tips in household almanacs and lifestyle magazines. Bought produce and ingredients became more popular, as well as dishes tasted in the city and manors. At the beginning of the 20th century, housekeeping courses and culinary schools became more widespread. Old ways of cooking and eating slowly disappeared and were left in the past.

On a personal note, my family owned a coffee and pasta factory in the 1930ies and 1940ies. Kristapa Freimaņa Makronu un Kafijas Fabrika – Kristaps was my great-great-grandfather – produced egg pasta and noodles, as well as roasted coffee and chicory. It first opened in early 1900s, and it was acquired by my family in late 1920ies. The factory was run by my great-grandfather Albinius until 1947. It then became a state-owned pasta factory. It is not clear when the production ceased. After the 1990, my family regained ownership of the building, and our new living room is the room where the packing was done. 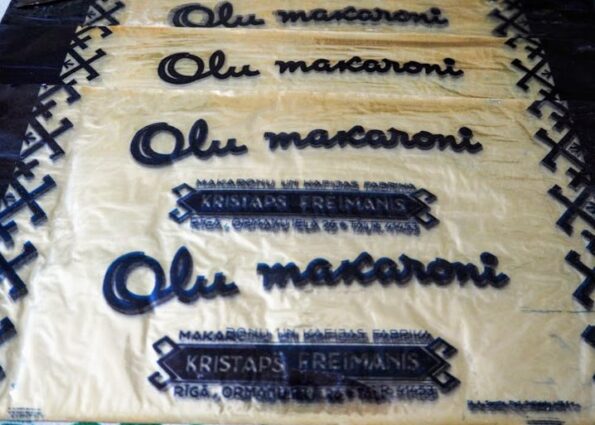 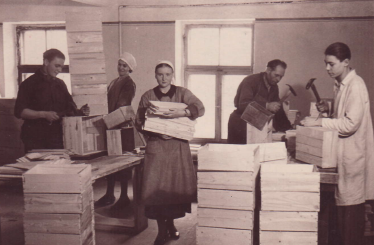 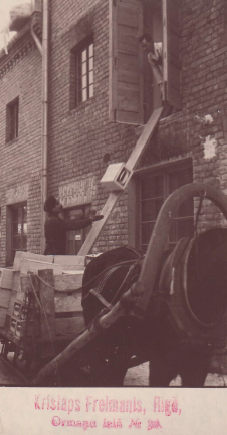 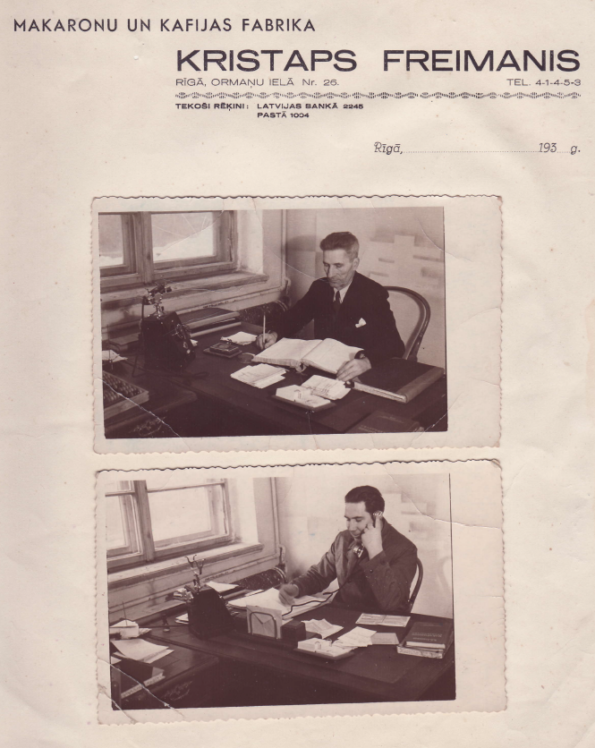 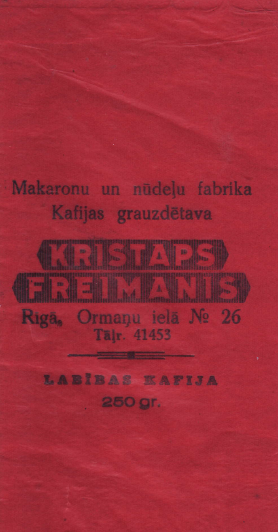 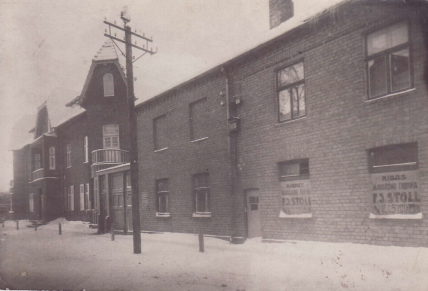