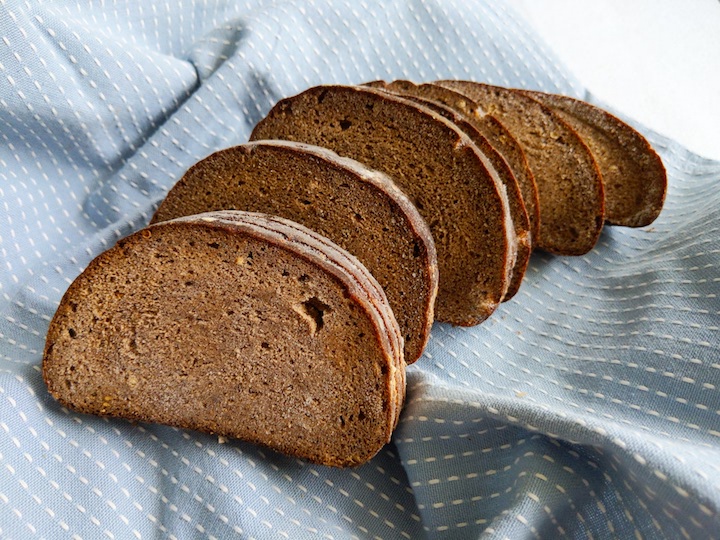 Sanita Stinkule, the Head of Ethnography Department of the National History Museum of Latvia, offers a quick glimpse in the history of Latvian food. This series of articles was originally published on delfi.lv, and they have been translated and republished with the permission from the author.

Part 1. Cereals and Bread
Humans discovered a long time ago that food could be found in nature. Initially, they fished, hunted, and foraged for roots, stems, berries, and nuts; later they learned to work the land and domesticate animals. Their diet changed and now consisted of cereals, legumes, root vegetables, meat, and milk. For generations, our ancestors lived on what labour and land gave them, what they could grow, harvest, store, and preserve. Salt was the only purchase – without it storing produce for winter would not be possible. Subsistence economy existed in Latvia up until the beginning of the 20th century.

Each year was divided into two parts on the farm – winter and summer. Farming was not possible in the winter; produce preserved in the summer was consumed in the winter, while the summer was spent growing and preserving food for winter. Food wise, the most abundant season was the winter when everything was available – potatoes, flour, groats, and meat; only milk was less common as cows stopped producing milk in September and October and they were not milked until the next calving season. Instead of cow’s milk, hemp milk was used; it was made by grinding dried hemp seeds in a pestle and adding water to them. The main meal in the winter and summer was home-baked whole grain rye bread and soup or porridge made from grains, legumes, and vegetables with the addition of meat and lard, as well as boiled sauerkraut.

Barley and rye – the most important grains

Just like in many other agrarian societies, the staple food in Latvia was the porridge. It was made from the most commonly grown cereal – barley. Barley is also the longest grown grain in Latvia – first evidence of it has been dated 4500 to 1500 years BC. Linguists are certain that words “mieži” (barley) and “maize” (bread) have the same origin. However, “maize” was not a single loaf of bread, but the entire bake, which could be between 5 to 12 loaves.

Bread was created when flour and water mixture was baked. Initially, it was just barley porridge baked on hot stones in the shape of flatbread making the porridge harder and drier. It was easier to store and use, so the bread replaced the porridge.

Sometime between the 8th and 9th century rye became the dominant culture in Latvia, and wholemeal rye bread was the staple of Latvian farmers until the 19th century – it was eaten at every mealtime, except when porridge was served.

How flour was made

Initially, flour was made by crushing grains between two stones – grain was poured on the larger stone and ground in flour with a smaller one. In an hour, only half a kilogram of grain could be turned into flour.

In the 11th century, stones were replaced by hand millstones, which allowed for wider use – grinding rye, barley, malt, salt, and oats for pigs.

Grinding was physically hard, therefore men did the majority of it, while women poured the grain and collected flour. In two hours 8 kilograms of grain could be ground in flour. At the end of 19th century, grain was ground in water mills or windmills – farmers collected all their grain in large sacks and took them to the mills. However, hand mills were still used at the beginning of the 20th century, as they were useful when small quantities of flour were required quickly.

Where and how bread was baked

To make bread, flour was mixed with warm water in the evening; the dough was sprinkled with flour, covered, and left in a warm place to prove until the morning. In the morning, more flour was added to the dough, it was kneaded and left again for the second proofing while the bread oven was prepared. Spruce was commonly used for fire as it created a hotter baking surface. If the kiln was lit in the granary (“rija”), bread was baked there. This way farmers could save firewood – while grain was drying, the bread was baked too. Kilns were large – each bake could produce up to 18 loaves of bread.

Before bread was placed in the oven, coal was removed and the oven was swept with a broom made from old bathhouse whisks (“čaukstere”). When the dough had risen, it was formed in loaves and placed in the oven. Bread peel was covered with maple or cabbage leaves, sometimes wood splinters (“skali”) or flour was used, and bread was placed on top of them. The bread was baked for 2 hours. After the first hour, loaves were pulled from the oven, and crusts were splashed with water so they become softer and didn’t split while baking. When returning the loaves to the oven, they were rotated – loaves that were at the front of the oven, went in the back, and those in the back came to the front.

Kneading through (“abra”) was never washed. The leftover dough was scraped out of the through with a special tool (“abrkasītis”). A fist-sized ball of dough was set aside for starter for the next bake; it was stored in flour in a special clay pot.

Rye was sown in the autumn. They would survive under the blanket of snow and then be in full bloom by Jāņi (June 24). Bread from new flour would be served at Jēkabi (July 25). Bread was baked once a week or once a fortnight, depending on the size of the household. During the mealtimes, the master of the house would cut the bread and portion it for everyone.

Why bread was baked from moss and ferns

In those poor years, grain was not threshed but milled with husks to create more volume. Sometimes straw, dried, ground-up ferns, white moss, or oak were added to flour when baking bread. Ferns made bread bitter and moist. Moss bread was softer and more palatable. Either way, the bread turned out black, unpleasant, and it could not hold shape – it was pulled from the oven with a wood poker and collected in a sieve.

There were several reasons for poor harvests. First, until the 19th century serfdom existed in Latvia, which meant forced labour, levies, and lack of rights. After serfdom was abolished, farmers rented the land from landlords (“muižnieks”) and they were doing manual labour and paid levies in return. All tasks were done on the landlord’s property first: plowing, sowing, harvesting, clearing new fields and expanding meadows, construction of buildings – it meant spending all summer days there while trying to work on your own land on breaks or at night.

What saved our Latvian ancestors from famine? You’ll find out in the future articles.