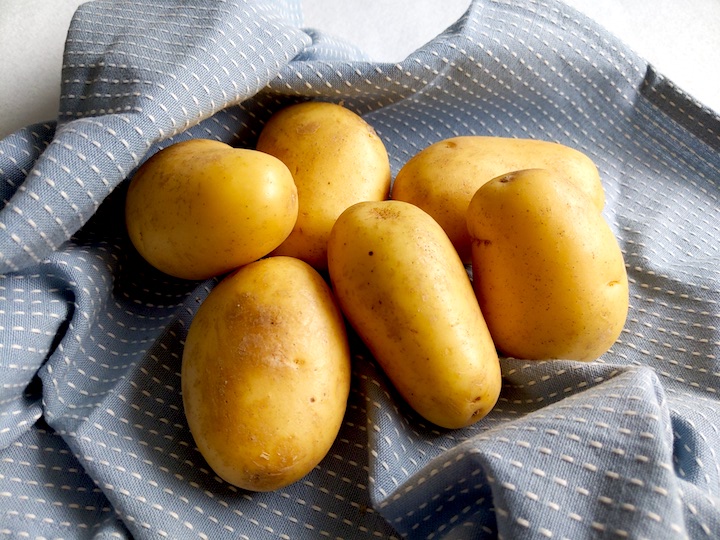 Sanita Stinkule, the Head of Ethnography Department of the National History Museum of Latvia, offers a quick glimpse in the history of Latvian food. This series of articles was originally published on delfi.lv, and they have been translated and republished with the permission from the author.

Part 2. Potatoes, hemp, and other vegetables.

What saved Latvian farmers from the famine in the years of poor grain harvest? As you may have guessed, it was the humble potato, which nowadays is appropriately called “second bread” (“otrā maize”). However, potatoes’ route to the Latvian stomach has not always been smooth.

Potato competed with the bread in the early 19th century, even though it had been introduced in Europe 3 centuries earlier. The history of potato started around 1200 years ago in South America, near Lake Titicaca on the border between Bolivia and Peru, 3800m above sea level. Potato travelled to Europe, and evidence suggests potatoes were first harvested in 1573 in Spain. Potatoes then travelled from Spanish court to the Pope, then to Vienna, London and Paris.

In Latvia, potatoes were first mentioned in the second part of the 17th century in the court of Duke Jacob in Courland. For the next 100 years, potatoes were planted in the flower gardens of manors as the plants had beautiful, bright flowers, and only rarely potatoes were served during major celebrations as the “fruit of the land”. Potatoes became more common in vegetable patches and on dinner tables during the second part of the 18th century. Farmers started to grow potatoes at the end of the 18th century.

From “devil’s apple” to “second bread”

Poor harvests and their consequences – hunger and illness – were harmful to the welfare of the country; they created stagnation in agriculture and trade, and reduced the number of people living in rural areas. There is no surprise the authorities attempted to fight famine. From the middle of the 18th century, they gave an order to manors to create food reserve funds, which would be drawn upon in the years of starvation. However, not every lord followed the orders; profits from selling harvests and making vodka were too tempting. Of course, some places cared about their farmers, and these farmers were encouraged to plant potatoes.

The first attempts of growing potatoes were met with doubt. Farmers called potatoes “devil’s apples” (velna āboli), which are taking the strength from the land. To force the farmers to grow apples some manors offered bonuses to those who planted the most potatoes. It took less than 100 years for the potato to become extremely popular – by the end of the 19th century, the potato was the second-biggest crop after cereals.

How Latvians harvested and ate the potatoes

Initially, potatoes were baked whole in the ash. Baked potatoes were collected in a basket and shaken to remove sand and ash. Before eating, they were brushed off with hands. Peeling of potatoes became more common at the end of the 19th century and it became the primary way of eating them at the beginning of the 20th century. By then potato was one of the main farmers’ food sources.

At harvest time, fields were plowed and then potatoes were collected on all fours – they were both collected and dug out from the ground. Potatoes were sorted on the field – larger ones in one basket, smaller ones in another one to feed the pigs.

When cellars did not exist, potatoes and other root vegetables were stored in pits. In more sandy properties, where water did not run, there were 10 to 20 pits – one for each of the farms nearby. Farmers grew not just potatoes; every house would have a vegetable garden next to it.

Latvian farmers were fond of legumes – peas, beans, and lentils. They were considered equal to cereals, and bread was not eaten with them. Beans and peas are some of the oldest vegetables, however, smaller varieties, commonly known as Turkish beans (small white beans) were only introduced in the 20th century.

Pea, bean, or lentil porridge was served several times a week. In the winter it was made with barley and lard, in the summer – with milk. By adding hemp, potatoes, onion, lard, or cooked meat to the porridge, pea or beanballs were created (“zirņu pikas”). Peas were also cooked dry by placing them in the oven after the bread had been baked. Grey peas were usually cooked on Saturdays, and a large bowl of peas was placed on the dining table for everyone to take some when they pleased. Beans were boiled and served similarly. Curdled milk (“rūgušpiens”) was drunk to wash them down.

Why cabbage was smashed with an axe

The cabbage was introduced in the Baltics around the 12th century, and every household grew them.

Cabbage harvest occurred late in the autumn. Some heads of the cabbage were kept for immediate consumption, while others were salted. When the cabbage was prepared for fermentation, it was important to squeeze them in the barrels so the cabbage juice would collect on the top – only then they would ferment and not spoil. It was not an easy task. To squish the cabbage, a clean wood-chopping axe was used – it had a long handle that could reach the bottom of the barrel and it was heavy enough to smash the cabbage and release its juices. Barrels were covered with wooden lid or planks and heavy stones placed on top. Fermented cabbage kept for a very long time.

Sauerkraut was boiled in a soup or cooked dry together with pork. They were also fried in a pan – when bread was removed from the oven, a pan of sauerkraut and meat was placed in the oven and potatoes thrown in the front so they cook at the same time. This dish was prepared on Saturday nights.

When the cabbage was boiled, barley and fatty smoked pork were added.

The oldest root vegetables in Latvia are turnips, swedes, and black radishes. Turnips were first grown in Latvia in the 5th century, and they are often mentioned in medieval times. They were baked in ashes, furnace of the trashing barn, added to barley porridge, and fermented for the winter. Since the arrival of the potatoes, the importance of turnips and swedes diminished. Carrots and beets were introduced in the 17th century, while cucumber, dill, pumpkin, parsley, and lettuce joined them in the 19th century. Herbs and spices were rarely used in Latvian dishes; most popular were caraway seeds, horseradish, juniper berries, onion, and garlic.

Hemp was used for both food and fibre. It has been grown in Latvia, as well as most of Eastern Europe, for over 2000 years. Hemp seeds were a significant source of nutrition – they substituted fat and milk. Dried and crushed hemp seeds were mixed with salt and eaten with cottage cheese or potatoes. Hemp butter or black butter was also very popular. It was made by crushing dried hemp seeds in the pestle while adding salted water until it formed a black oily mixture. It went well with bread and potatoes.

If you are interested in the history of potatoes, I can recommend John Reader’s book “The Untold History of the Potato”.