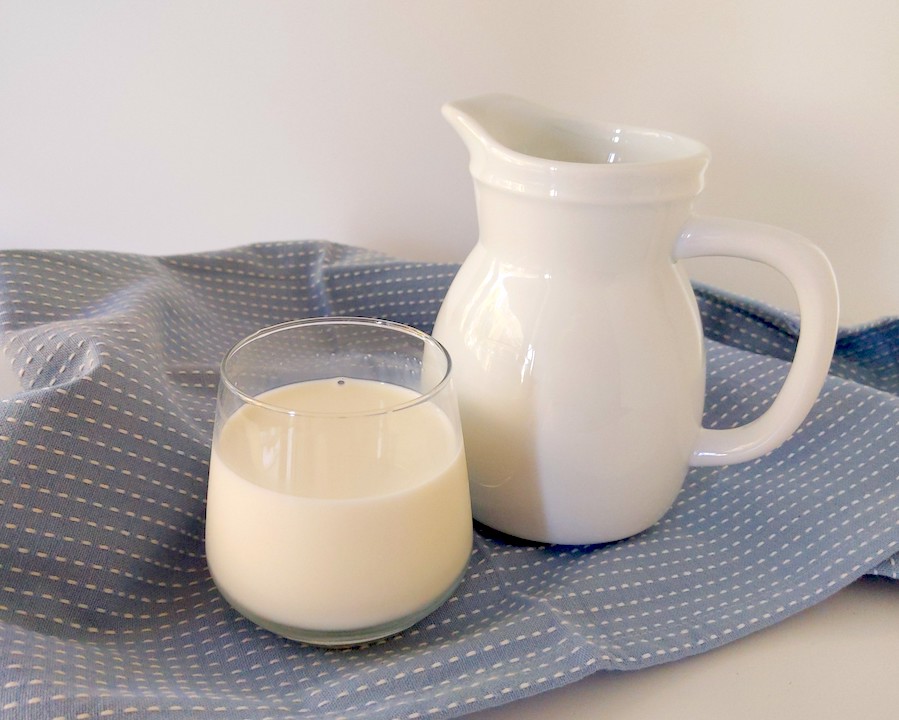 Sanita Stinkule, the Head of Ethnography Department of the National History Museum of Latvia, offers a quick glimpse into the history of Latvian food. This series of articles was originally published on delfi.lv, and they have been translated and republished with permission from the author.

The fourth part of the series is about traditional dairy products – curdled milk (rūgušpiens), cream, butter, quark, and fresh cheese. Milk was let to curdle. Cream was skimmed from the top of the curdled milk. Cream was churned into butter; skimmed curdled milk was served with meals and turned into quark, and quark was used to make cheese.

Milk was a critical part of summer meals. It is worth noting that cows initially were kept for manure to fertilise the field – animals were small and did not produce a lot of milk. Cows could not be milked for a significant part of the year, so milk became a seasonal product. If porridge and soups were made with meat and fat in the winter, they were made with milk in the summer. Thin porridge or soup from barley, flour or dumplings was made in the morning to last all day.

The basis of milk processing was fermentation. Curdling occurred slowly; during this process, milk fats separated and floated to the top. Fermentation was dictated by local conditions: as cows produced so little milk, it was necessary to collect milk to make quark and cream and fermentation was unavoidable.

Fresh milk, or commonly known as sweet milk (not curdled), was not used much. It was saved for children and ill household members.

Curdled milk – for eating, not drinking

The most commonly used dairy product in farmers’ kitchens was curdled milk. Fresh milk was stored in small buckets in a cool place until it curdled. When it had curdled, cream was taken from the top and curdled milk was served in those same buckets.

Good curdled milk had to be thick, solid and with a pleasant, slightly sour taste. The best-curdled milk split into thick slices when it was poured. It was eaten with a spoon, therefore, the common expression is “to eat curdled milk”, rather than drink it. Serving curdled milk in drinking cups only came about in the 1920ies and 1930ies.

However, there are relatively few dishes made with curdled milk. Most commonly cottage cheese and bread was added to it, or curdled milk was poured over cooked beans and peas. Another dish involved boiling, then roasting and grinding a mix of grains and legumes – rye, barley, oats, peas and beans – and then pouring over curdled milk. It is known as kami in Vidzeme, sutnes in Latgale and pūtelis in Kurzeme. Curdled milk was also served with fried herring. Skābputra (literally “sour porridge”) – fermented barley porridge with curdled milk lumps – was well-liked in Kurzeme. A similar drink – skābums – was popular in Vidzeme. It was made by mixing flour with water, letting it ferment and adding curdled milk.

The most valuable part of the milk was cream. Milk was let to rest until cream could be skimmed from the top. Cream then was collected in large clay pots or wooden churns (ķērne) until there was enough to make butter. Cream as an ingredient in the cooking was used very rarely, first notes about cream as an addition to the food are from the 18th century, and even then it was used only in the kitchens of manors and rich city dwellers.

Cream became more widely available in the 20th century with advances in milk processing technology, and it is now a substantial ingredient. If cottage cheese used to be eaten with curdled milk, now cream is added to it instead. Vegetable salads with cream dressing became quite common. Cream was added to sauces that were served with porridge or potatoes.

Butter was worth its weight in gold

The most expensive dairy product was butter. Butter was first mentioned in the 14th century in the lists of wartime loots and farmers’ levies. In the 20th century, butter became the main focus of milk and cattle industry. In foreign markets, Latvian butter competed successfully with exports from other countries.

Traditionally butter was made from sour cream that was skimmed from the top on curdled milk. Butter was made when a sufficient amount of cream was collected, usually once a week. The cream continued to ferment after collecting so it was common for butter to have a sour, even bitter flavour.

Even in the 19th century butter was served during celebrations; it was not for everyday consumption. If circumstances allowed and butter was added to the porridge, a piece of butter was placed in the middle of the bowl of hot porridge and all household members could dip their spoons in the melted butter. If butter was eaten with bread, a slice of butter was placed on bread, and each bite was cut off with a knife. Spreading butter on the bread is a relatively new practice that came from cities and manors.

How butter was churned and washed

The oldest way to make the butter was whipping it with a spoon in a bowl, pot or pail. It used to be whipped by hand too. Up until the end of the 19th century, the most common vessel for making butter was a tall churn. Rotating paddle churns were also used from the end of the 18th century in the manors, while they were rarely seen at small farms as farmers did not produce a lot of butter. They preferred to use upright churns with paddles instead of plungers.

After the butter was churned, it was washed. Lumps of butter were placed in a through and covered with cold, clean water and pressed with hands. Water was changed frequently until the water ran clear; butter was washed so it does not spoil from the traces of buttermilk. To keep the butter even longer, it was heavily salted- often 7 to 10% of the entire volume would be salt that allowed keeping the butter in relatively high temperatures. Salted butter was stored in wooden pails or clay pots, and taken to markets for sale, as it was a valuable product to exchange for cash.

Another important dairy product was cottage cheese made from curdled milk. In the 19th century, there were two ways how to make cottage cheese. The first and more ancient method was to ferment the milk until protein separated from the whey; curdled milk was strained. The other method involved heating curdled milk until it thickened and curds settled on top. After heating, cottage cheese was strained, placed in a bowl or a bucket and squeezed with hands and salted. Occasionally, a thin layer of melted butter or pork fat was poured on top of the cottage cheese. The container was covered with a clean cloth and a piece of wood and a stone for weight, and then cold saltwater or whey was poured over it. Cottage cheese packed this way could keep for several months.

Cottage cheese was mixed with curdled milk or served with milk and bread. It was also added to milk soups and porridge. Another popular dish was cottage cheese with crushed hemp seeds or hemp flour rolled in balls and served on bread.

Why cheese had to be chopped with an axe

The last step in dairy processing was cheese production; cheese was the second most important dairy product after butter. To make cheese, significant amounts of cottage cheese had to be collected, therefore in the 19th century farmers made cheese only for celebrations, not everyday consumption. It became more readily available only in the 20th century.

Latvians made cheese from cottage cheese; acid-set or sour milk cheese is the most ancient way of making cheese in Europe. Cheese from fresh milk was only made in manors up until the middle of the 19th century.

The simplest way to make cheese was without any additions or just with salt and caraway seeds. In the 20th century, when dairy production became more advanced, fat – butter or cream – was added to the cheese. Eggs were also added only at the beginning of the 20th century.

To preserve the cheese for consumption in the winter, it was rubbed with butter and dried from a few weeks to a few months. Cheese was stored under rye and wheat grain in the granary. If it was intended to be stored even longer, it was dried even longer, making the cheese so hard it had to be chopped with an axe. Some cheeses were buttered and fried in the oven before storing them.

Note: I have kept the translation of “biezpiens” as cottage cheese. I have chosen this term because it is the most widely recognised and available in the Western world, even though it is not quite the same in texture and flavour. Other options are farmers cheese, curds and quark. You can also make fresh milk cottage cheese quite easily at home, the recipe is the link.